The Origins of High Heels as a Status Symbol (Paper Excerpt)

This is an excerpt from a larger paper entitled "High Heels: Investigating the Connection of Shoes to Feminine Maturity," written Spring 2013.

The origins of high heels can be traced back to the near east as a form of riding footwear.1 According to curator Elizabeth Semmelhack, for centuries they were worn by the Persians because, “When the soldier stood up in his stirrups, the heel helped him to secure his stance so that he could shoot his bow and arrow more effectively.” In 1599, Shah Abbas I sent diplomats to Russia, Germany and Spain in order to forge alliances in his fight against the Ottoman Empire. Persian styles spread throughout Europe's aristocracy, and heels became a symbol of masculinity.

As heels became more popular with the wealthy patrons of Europe in the 17th century, the lower classes began to appropriate the trend. In reaction to this encroachment into high fashion, members of the upper class began to favor taller, less accessible shoes.2 Thus high heels were born. Those who could afford to wear high heels did not have to work long hours on their feet or walk through the muddy, cobbled streets, and were physically elevated above those of the lesser classes who were unable to participate in the fashion for practical and financial reasons.

There also came the issue of distinguishing men's and women's fashions in the early 17th century. In the 1630s, women began to dress more similarly to men, cutting their hair, wearing masculine hats, smoking pipes and adding epaulettes to their outfits.3 Until the end of the century, women's and men's high heeled fashions remained relatively unisex. As women's fashions appeared more closely to resemble men's attire, the heel of men's shoes became squarer, lower and stocky. Women's, on the other hand, became slender and curvaceous.4 The height of the heel and the way in which the shoe was tapered gave the illusion that a woman's foot was more delicate and dainty than that of men's.5 Just the tip of the shoe would peep out from under the hemline, giving the impression that the foot was smaller than it was. Men's shoes did not curve in such a way as to make it appear to have changed.

In 1670, Louis XIV, King of France, made an edict that only those favored by the court could wear red-soled heels, making them an instant fashion icon.6 Their popularity spread overseas where the coronation portrait of King Charles II shows him wearing a pair of red, French-styled heels despite already being over six feet tall.7 The importance of the color red lay in the fact that it was expensive to produce and evoked martial overtones, and therefore became a brand of royalty. Louis XIV is well-known as a fan of heels, using them to elevate himself beyond his five foot four inch stature. Often Louis XIV would have his heels decorated with elaborate battle scenes, deepening their connection to masculine themes. 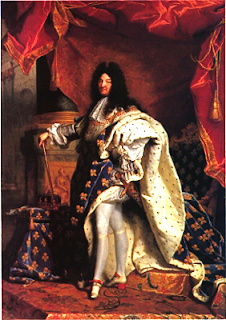 Over the next century, the association of high heels with masculinity would vanish. The “Great Male Renunciation” during the Enlightenment prescribed that men were creatures of great reason and education unconcerned with flamboyant fashion tastes.8 Their clothing styles reflected these ideals by becoming more rational and pared down. Men began to wear less jewelry and favored dark, somber colors over the previously used bright fabrics. On the other hand, women were seen as irrational creatures with a tendency to follow ridiculous fashion trends. Despite their early connections to masculinity, war and showmanship, high heels, now known for their inability to allow the wearer to move easily, was attributed to women's senses. According to Semmelhack, “Attention to matters of dress was offered as proof of women's inborn proclivity toward foolish adornment, and the wearing of high heels provided clear evidence of this failing. In contrast, men's rejection of the high heel and other forms of impractical dress was seen as confirming their intrinsic good taste.”9 By 1740, men had abandoned heels entirely, about half a century before they fell out of favor with women as well following the French Revolution. Heels did not return until the mid 19th century.10 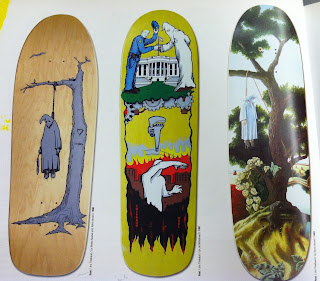 Remembering the History of White Supremacy via Skateboards from the 1990s

After years of working for skateboard brands Powell and NHS, artist Jim Thiebaud established Real Skateboards with Powell teammate Tommy Guerrero in 1990. Thiebaud said, “After my experiences with Powel and NHS, I wanted my first board on Real to mean something, have a lasting impact. Skateboarding was at a point where graphics that didn’t really mean shit were just being churned out, and I saw it as an opportunity to do more than just cut-and-paste images that looked cool.” As the Ku Klux Klan began to reemerge in the mainstream due to marches across the country in the early ‘90s, Thiebaud saw his opportunity to make a statement against the rise of white supremacy, designing both his iconic Hanging Klansman (1990) deck and The Klansman at Washington D.C. (1991) Sharing these graphics—and the story behind them—is especially important following the riot and failed coup on January 6, 2021. Unfortunately, the fable people have told themselves repeatedly is that white supremacists and raci